Leave or Die: Analysis and Memory of Refugees By Raïs Neza Boneza 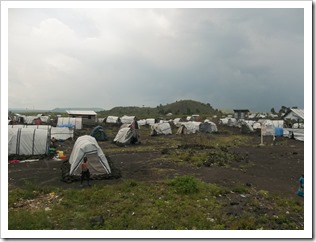 Refugees from DR Congo board a UNHCR truck in Rwanda (Photo credit: noodlepie)

Memory is a vast lake of remembrances sometimes disrupted by huge waves of thought. For every June 20th, International Day of the Refugee, the entire world will remember the humanitarian holocaust of this century in Afghanistan, in Iraq, Palestine, or in the Great-Lakes Region in East-Africa…

To abandon goods and relatives, to desert towns and cities, to be far from your country where you were once born; in search of the unknown, married to grief, pity and chronicled anxiety. That is a common experience for all refugees, whatever their place of origin. To struggle against famine or thirst, to cover nudity with a small piece of cloth, to lo

Yes! To walk, from hills to valleys, to cross rivers and lakes, borders and countries, sometimes continents, in search of safety and peace. To leave behind damages, desolation and perdition.

The clock rings. Announcements of death, disappearances and injuries reach us. The thunder of cannons we hear. In less than a quarter-hour, maybe that could be my end too. One group passes, a second group…

Decided, we take with us little dishes, clothes, and some food. The most courageous have decided to stay. But they will pay with their lives. Messengers of death break in and advance toward civilians, sure to capture their prey.

You have no more time to take your diploma, your beautiful suit, and your photos. All is buried in the garbage of the past. Call rather, “The children!” “The oldest is missing!” “The youngest one is sick.” “I will carry him upon my shoulders.” Behind, a woman silently weeps.

Hours and days of walking. The youngest on my shoulders claims food and has to drink. Three more endless days to cross the borders and win safety. No food, no drink, but we cannot stop and no mistake must occur. Always forward, breathless, we are only human beings.

That is the daily life of a refugee in flight. It is not so difficult to define him or her: a man or woman in search of peace. Warriors or agents of brutality have violated their basic rights. Therefore they must seek shelter somewhere else.

A refugee is a human being too. To become a refugee, he was constrained

to choose whether to stay or die, and to leave or suffer. Well! Every human would choose to leave as a question of survival. But, nevertheless, the most audacious man chooses to stay. And effectively he dies or suffers from humiliation or misery. Of course, there are those who could not run; unfortunately most victims are women and children. They are subjected to the evil consequences of man’s cruelest inhumanity.

Even without conflicts or political instabilities, all men or women can be brought to leave and abandon the dearest ones left behind. And, in a spiritual way, notice that we all are refugees on this earth, since we all pass by leaving the world behind.

Nevertheless, even in their new welcomed land, refugees do not yet recover relief or quietness. Victims of stereotypes such as criminalization or segregation, they are considered less human.

A refugee is a person who has mental and physical capacities when he is treated with dignity. The first step is to integrate him; he must be called by his proper name. He is called John, Hamad, Young or Manbo… Morally being a refugee is not in itself an identity.

Being a human being, a refugee must be considered equal to his or her fellow human brothers and sisters. As the first article of the Universal Declaration of Human Rights specifies: “All human beings are born free and equal in dignity and in rights. They are endowed with reason and conscience, and must act towards one another in a spirit of brotherhood.” No one has sought to become

a refugee. A refugee needs integration in the new country rather than rejection. He or she cannot achieve fulfillment if the new society is not totally involved in this process of integration. Only this will allow the refugee, in the end, to become a citizen who is partici- pating more in the well-being of the new community.

Drawing From the Depth of Materials Within the Soil of Colonial Violence, Binta Diaw Is Literally Growing New Meaning https://contemporaryand.com/magazines/drawing-from-the-depth-of-materials-and-within-the-soil-of-colonial-violence-binta-diaw-is-literally-growing-new-meaning/

The ungrateful refugee: ‘We have no debt to repay’ https://www.theguardian.com/world/2017/apr/04/dina-nayeri-ungrateful-refugee